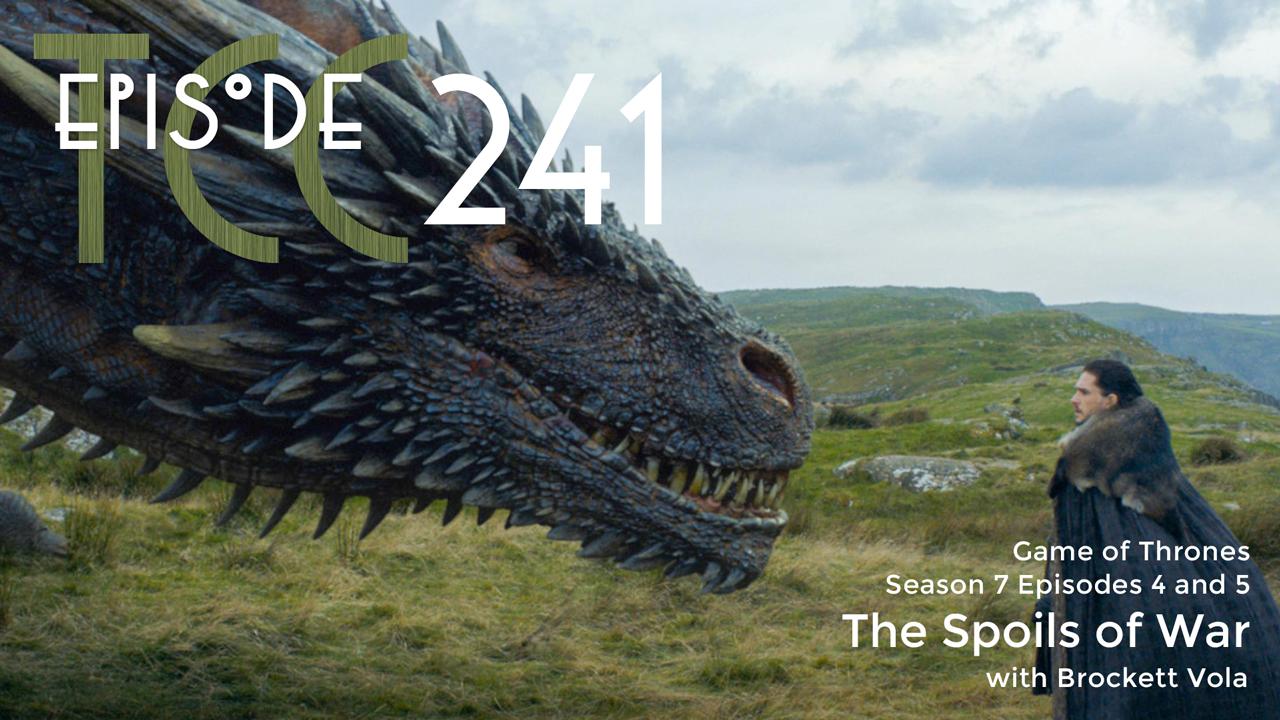 Brockett is here for a Game of Thrones double wammy. We talk about the path of our heroes and anti-heroes both the 4th and 5th episodes of the 7th season. Hold on to your Drogon!

Arya returns to Winterfell, where she is reunited with Sansa and spars with Brienne, both of whom are unnerved by her exceptional fighting skills. Bran unemotionally bids farewell to Meera, divulging that he is no longer the boy she accompanied through the North. Littlefinger presents Bran with the dagger that was nearly used to assassinate him previously. Cersei promises the Iron Bank a full return on their investment, as a loot train from Highgarden is soon to arrive. Jon brings Daenerys to the dragonglass mine, where he shows ancient cave paintings depicting that the First Men and the Children of the Forest joined forces against the undead. Later, Daenerys learns that the Casterly Rock attack was a Lannister decoy, with Highgarden falling to the Lannisters. Despite Tyrion’s protests, she decides to take action. Led by Daenerys riding Drogon and the Dothraki cavalry, Jaime and Bronn are caught by surprise while supervising the gold shipment, and the Dothraki and Drogon’s fire decimate the Lannister army. Drogon is wounded by a bolt from Bronn manning the scorpion ballista, while Jaime tries to attack Daenerys. Drogon launches his fire breath at Jaime, but Bronn tackles him into a river.

Jaime and Bronn return to King’s Landing. Against Tyrion’s advice, Daenerys burns Randyll and Dickon alive for remaining allegiant to Cersei, forcing the other captives to pledge fealty to the former. Jorah arrives at Dragonstone and reunites with Daenerys. Maester Wolkan alerts Jon and the Citadel about the approaching wights to the Eastwatch by the Sea. Jon decides to travel beyond the Wall and capture a wight in order to convince Cersei for a temporary alliance. Davos smuggles Tyrion inside King’s Landing, where he secretly meets with Jaime and offers an armistice, which Cersei accepts, informing Jaime that she is pregnant. Davos rendezvouses with Gendry and returns him to Dragonstone. With the Citadel ignoring Wolkan’s letter, Samwell steals several books and leaves with Gilly and Little Sam. At Winterfell, Littlefinger notices Arya spying on him and leads her to take a letter written by Sansa from his room. Jon, Jorah, and Gendry, joined by the Hound, the Brotherhood, and a group of the Free Folk led by Tormund, leave Eastwatch and pass the Wall, intending to capture one White Walker as evidence for Cersei that the Army of the Dead is real.

You can listen to The Citadel Cafe live on the Alpha Geek media mobile app! Point your mobile browser to AlphaGeekMedia.com.